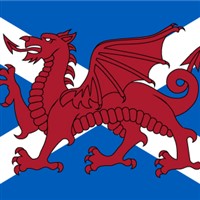 The town of Dumfries was established long ago in the year 1186 as a Royal Burgh.

Being built at a crossing point on the river Nith, it was a frontier town until 1234 when  Galloway became a part of Scotland.

It prospered greatly as a market town and port – a legacy which has allowed Dumfries to become the administrative centre for Dumfries and Galloway. The first bridge to be built over the Nith, Devorgilla’s Bridge, was erected in 1432. Though it has been rebuilt numerous times, it is today one of Scotland’s oldest standing bridges and is still used by pedestrians.

Another graver claim to fame is that Dumfries is the site of the last public hanging to occur in Scotland.

These are just some of the interesting historical facts that give the town its unique feel.

Most visitors to Dumfries will enjoy a trip to the 18th century watermill, which acts as a sort of museum. The windmill tower houses the Dumfries Museum and the Camera Obscura, which provide a rather unique look into the past.

Also near the watermill is the  Robert Burns Centre – a museum dedicated to the life of this famous Scottish poet’s last years which were spent in the city. Across the Devorgilla Bridge you will find the Old Bridge House, which is the town’s oldest house and dates back to 1660.

No doubt as you make your way around this interesting town you will fall in love with the place in much the same way as Robert Burns did.

No trip is complete without a stay in Dumfries, the Queen of the South.

JOIN US ON A SCOTLAND RUGBY WEEKEND TO ENJOY....